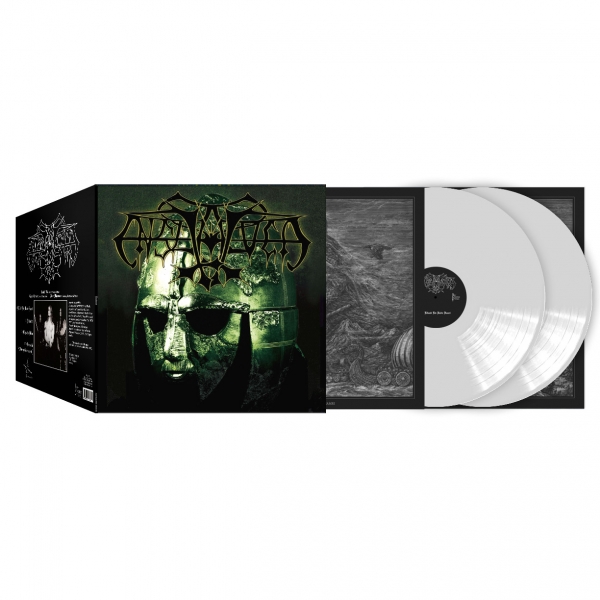 Enslaved issues "Vikingligr Veldi" – this is the first ever official vinyl release of their legendary debut – 3rd repress on Frosted Clear vinyl, limited to 1000 copies!

The astonishing new layout was done by Z. Bielak (Ghost, Mayhem, etc.), and includes four brand new illustrations specially made for this legendary album. Z. Bielak has stayed true to the ideals of the era (it was originally scheduled for release on vinyl in 1993); this 2LP Gatefold with illustrated pockets has been respectfully remastered for vinyl by Iver Sandøy; preserving every bit of original dynamics.

Enslaved's 1st full-length album was co-produced with the legendary Pytten in the world famous Grieghallen Studio in Bergen, Norway. It was originally released on Deathlike Silence Productions, an Oslo based independent record label founded in the late 1980s. The infamous label was run by Euronymous, the late mastermind and guitarist behind Black Metal pioneers Mayhem.

This album has lyrics in Icelandic, and is a tribute to the Norse landscape, history and mythology. The compositions and production matches these themes with long horizontal songscapes, dense atmospheres and winds from the past.

Enslaved was formed in 1991 by Ivar Bjørnson and Grutle Kjellson, and did their first demo “Yggdrasill” in the summer of 1992, while the legendary mini-album “Hordanes Land” was released the year after in 1993. “Vikingligr Veldi” came in the spring of 1994 and is Enslaved’s landmark debut album.